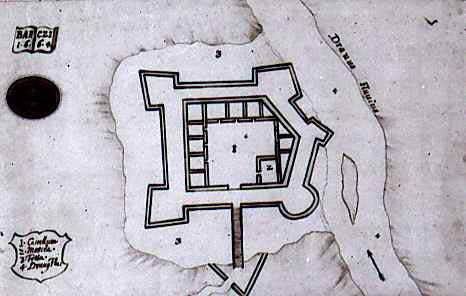 Barcs castle from the Turkish era

Barcs castle from the Turkish era

After the fall of Szigetvár in 1566, Iskender, the bey of Szigetvár, built a palisade castle in Barcs in 1567. The castle was built on the bank of the Drava to control the crossing and the boat traffic. In 1567, the Turkish navy of the Drava region was also summoned here.

The castle was surrounded by three rows of filled plank walls and a moat, and inside the guards’ residential houses, warehouses and a small mosque took place. The number of guards was 193 people in 1568, 178 in 1619, most of them belonged to the infantry. Until the fall of Kanizsa (1600), the castle belonged to the outer defensive line of the Turkish Empire, after fall it was no longer important.

It was completely destroyed by a Hungarian attack in 1595, but was soon rebuilt by the Turks. During Miklós Zrínyi’s 1663-64 winter military campaign, the castle was occupied and destroyed and was never rebuilt. Its location was identified in 1978 by local history research. Between 1989 and 1994, minor excavations took place in the former area of ​​the castle in four excavation seasons, then in 2002-2003 the excavating archaeologist was able to uncover larger details within the framework of the previous excavation.