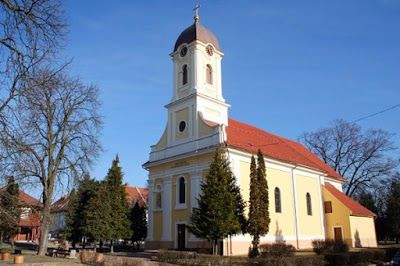 In the 18th century, the Catholic population of Barcs had their masses in the small wooden church built around 1723, which stood on or around the place of today’s Arany János Primary School.

According to the minutes of the episcopal visitation held in 1815, “92 years ago a wooden church was built in Barcs in honour of St. John the Baptist, which can collapse at any moment. Thanks to Count Ferenc Széchényi, a beautiful, spacious church built of solid material in 1814 is under construction, it can accommodate the entire parish and it will have a tower too.” After this concise summary, let us examine in a little more detail the circumstances and reasons for building the church. Count Ferenc Széchényi, as the chief lord of Somogy county and the royal commissioner of the Drava regulation, paid special attention to his market town from the end of the 1790s. The status of the market town and the growing population made it necessary for the Catholic congregation, that had previously belonged to the Babócsa parish, to have an independent parish and church in Barcs.

After the parish was founded in 1803, the Count donated a plot of land to the market town to build their church there (with the help of the landlord). Due to the lengthy administration and landscaping work, the foundation stone could not be laid until 1814. The church was already under construction when the old wooden church and three more houses burned down in 1816. Believers left without a church and the landlord were in a difficult position, the building had to be completed as soon as possible. Finally, they could start using the church in 1819.

The chronogram on the facade says: “AEDES HAECCE DEI EXSTAT SANCTA IOHANNI, that is, “Behold, this Holy Church of God already exists in honour of St. John”. The numerical value of the letters (chronostichon) in the Latin text, highlighted in a different colour, says: 1819, the date of completion. However, this is only true for the nave because the tower took another two years to build. The consecration took place in 1821 after the tower was completed. Fate brought it so that the builder-owner could not see it, Ferenc Széchényi died in 1820. In its present form, the church still largely retains its original, classicist style features, although it has been altered several times over the past two centuries.

The shingles of the roof were replaced first with tiles and then with slates, and a sacristy was added. In 1926, the church was painted from the donations of the people, and a ten and a half hundredweight bell and a small bell (1924) were cast in the Rincker foundry in Budapest in place of the bells taken for military purposes in 1916. The middle bell was made in 1948. The interior was substantially altered only during the time of priest Jenő Czövek (1943-1954), then the main altar was completely rebuilt.

The old altarpiece, painted by Ignác Mauer, depicting St. John the Baptist was removed (1943) because, in the parish priest’s view, its way of depicting St. John offended the believers. It was replaced by a statue of Christ the King. According to the folklore, the two angel statues on the main altar and the statues of the apostles Peter and Paul above the two sides of the altar are among the relics rescued from the old church. Of the first fixtures, the baptismal font made in 1815, is still in use today. With the conversion, the dedication of the church and the parish also changed. The heavily worn interior walls were repainted under the time of priest József Horváth (1954-1973), when local artist László Maróti made frescoes depicting saints in Hungary.

The exterior renovation took place several times in the 1970s and 80s, so it is still an imposing building, harmonious in appearance, defining the atmosphere of its surroundings, which, in addition to its religious purpose, more often hosts secular events and concerts.