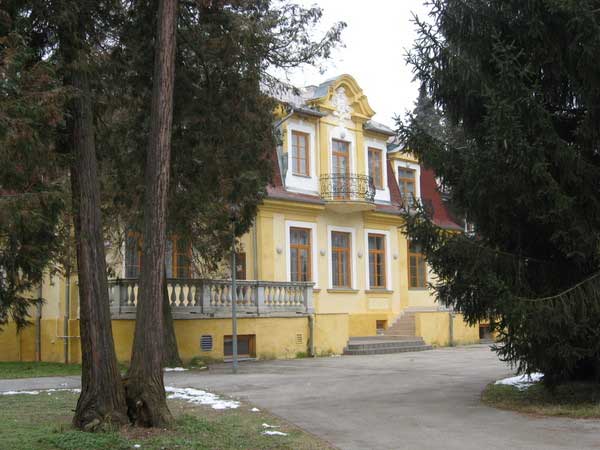 Part of the Aranyospuszta estate was separated from the estate of Tarnóca at the turn of the century as a legacy for the young Count Ferenc Széchényi.

Ferenc Széchényi was one of the grandchildren of Ferenc Széchényi (1835-1908), the “founder of the estate” in Tarnóca. After the demarcation of the Trianon borders, one of the beautiful points of the estate, Aranyospuszta, was singled out by the young Count and he began to create a home and a farm there. The castle, or, in terms of its size, it is more of a mansion, built in the neo-baroque style, was built around 1925. The 35-room building was built by Géza Bájer, a master builder from Barcs, and we have good reason to assume that the other professional works were also done by craftsmen from Barcs.

The castle has a mansard roof, its elegance is enhanced by a covered driveway, spacious balconies, terraces and a decorative staircase. A wide, tree-lined road led to the main entrance. The main facade was decorated with a stone-carved coat of arms of the Széchényi family. The Count’s family went abroad in 1944. The building was revived after the war as a forestry vocational school, and later became a dormitory of the institution that moved to Barcs. After several renovations and alterations, it still functions as a dormitory.